You are here: Home / Politics / Govt / Palin will be in Indianola Saturday 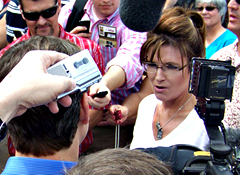 A source familiar with her plans says former Alaska Governor Sarah Palin will appear at a “Tea Party of America” event in Indianola this weekend.

A person close to the Palins told Radio Iowa this afternoon Sarah Palin will be at the event Saturday. It will be staged at the balloon fields in Indianola.

There’s been ongoing confusion about the speaking roster for the event. For example, Delaware Republican Christine O’Donnell, an unsuccessful candidate for the U.S. Senate in 2010, was invited.

Then she was dis-invited, then re-invited to speak, but now O’Donnell has been uninvited again.

Weeks ago, when Palin’s appearance at the event was first announced, it served to amp-up the speculation about whether Palin intends to run for president in 2012.

Palin visited the State Fair earlier this month, just before the Iowa GOP’s Straw Poll, but Palin’s name wasn’t on the ballot for the event as party officials decided to list only “declared” candidates. This Saturday’s event in Indianola is scheduled to start at 11 o’clock and conclude at 2 p.m. It will be held in the same location where Senator Tom Harkin holds his annual “Steak Fry” fundraiser.