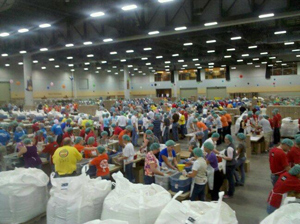 What’s billed as the nation’s largest volunteer food-packaging effort is underway this morning  in Des Moines.

The goal of the Meals from the Heartland Annual Hunger Fight is to package at least four-million meals in four days.

Organizer Melissa Keen says thousands of volunteers from across Iowa will be combining scoops of various ingredients in plastic containers.

“There’s rice, dried vegetables — which is tomatoes, cabbage, onion, bell peppers and other yummy vegetables like that, and then a soy protein and vitamins,” Keen says. “The cool thing about this year is the soy is actually grown right here in Iowa and the rice is grown in the U.S., so we’re pretty excited about that.”

She says the packaged food will be delivered to children and families in need in Iowa, New Mexico, Haiti and South Africa.”We also are sending meals this year to Kenya to help with the Somali relief,” Keen says. “That’s being done through a new partnership we have with Convoy of Hope, based in Springfield, Missouri. They have all of the arrangements set up so we can guarantee our meals actually get to the people who need them there.”

She says each package assembled at the event feeds a family of six. To reach the goal of four-million meals in four days, Keen says they’re hoping to match last year’s landmark of 15,000 volunteers. “We bring in folks from different churches but every denomination is welcome, various businesses in all industries, various organizations and schools from across the state of Iowa,” Keen says. “Anyone that’s interested in coming to help package is more than welcome.”

The endeavor began at 9 A.M. at Hy-Vee Hall in downtown Des Moines and runs through Saturday. Donations help purchase and transport the food being packaged. Contributions may be made online or at the event and are tax-deductible.