You are here: Home / Education / 2012 Teacher of the Year is from Norwalk (video) 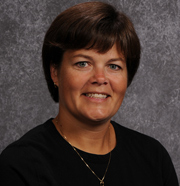 Students and staff attending an assembly this morning at Norwalk Middle School were surprised when Governor Branstad walked on stage. He was there to introduce the 2012 Iowa Teacher of Year.

Students cheered as 6th and 7th grade physical education teacher Charity Campbell was presented with the award. The 37-year-old Campbell has been at Norwalk for 14 years.

Campbell says she realizes P.E. usually isn’t recognized in schools as being as important as math and reading.

“So it’s very exciting to know that I’ll be able to talk about how physical education can be important in the math and reading curriculum and increase (student’s) knowledge in those areas as well,” Campbell said. Her tenure as Iowa Teacher of the Year will begin in January.

Campbell plans to encourage classroom teachers to give their students “brain breaks.” She says research shows getting kids up and moving after 15 to 20 minutes of sitting can improve their attentiveness and ability to learn. Campbell says kids should be taught a “sound body” is critical to a “sound mind.”

“I think the emphasis has been on sound mind and we should be…we’re trying to increase test scores, but we’re finding through brain research that a sound body is going to help that just as much as more time in the classroom,” Campbell said. Norwalk Middle School Principal Denny Wulf nominated Campbell for the award. He calls Campbell a “visionary and proactive leader” and praised her for her work as a mentor to other teachers.

Campbell helped create a mentoring program for first-year teachers at Norwalk. Campbell spent one year teaching in the Eldora-New Providence School District before moving to Norwalk in 1998. Campbell will be honored with four other finalists for the Iowa Teacher of the Year award during a luncheon in Des Moines on October 28.