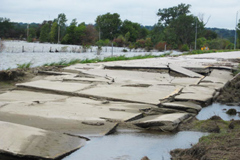 With Missouri River flood waters slowly receding, Iowa Department of Transportation officials must now work out a plan to deal with the damage done to many miles of highways and Interstates 29 and 680.

D.O.T. spokeswoman Dena Gray-Fisher says some areas where the murky water is pooled will have to be drained manually.

“It’s also going to take a lot of work just to drain out the area so we can get in there and do something,” Gray-Fisher says.

Once the water is gone, they can start the process of inspecting the area to see how much of the road is left and what happened to the soil under the roadways.

“If there’s actually a slab of pavement left there and if the road looks semi-sound, then we’ll go in there with some ground-penetrating ultrasound devices that actually test the road,” Gray-Fisher says. “They look for voids underneath the pavement. They also look for how stable is that soil because if you’re going to put heavy trucks on that, you want to make sure it can sustain that kind of weight.”

For months, there have been huge sandbag berms placed along some sections of roads, including Highway 30 leading from Missouri Valley, Iowa, to Blair, Nebraska. Gray-Fisher says those sandbags will be removed. She says, “The sand bags that are the large ones that we put along the interstate and on U.S. Highway 30, the bags will be cut, the sand released and we will go in there with endloaders and haul that sand away.”

As far as a time table for when some of these roads will reopen, Gray-Fisher says it won’t be long before they can actually see what is under that water. She says, “Between the next ten days to a couple of weeks, we are starting to see the roads emerge and we can start to see a little bit better what the picture is.”

Gray-Fisher says a timetable for repair and reconstruction can’t be developed until inspections are complete. Areas of concern include I-680, north of Council Bluffs, which goes over the Mormon Bridge into Omaha and I-29 south of Glenwood, as it’s been underwater more than two months.