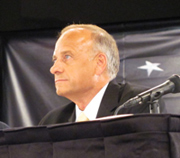 Five Republican presidential candidates gathered in South Carolina yesterday for a forum and Iowa Congressman Steve King was on the panel, asking questions.

“Hopefully we filled some of the pieces in in the jigsaw puzzle,” King told reporters after the forum. “I was also impressed by the depth of the candidates. When I listened to them talk…even though I know all these candidates, things came out of these candidates that I’ve never heard in the time that I’ve had to be around them.”

King posed questions about foreign policy and immigration. King has not endorsed a candidate for 2012 and he told reporters in South Carolina that yesterday’s event didn’t steer him toward or away from a candidate.

“I know I couldn’t stand here and say I didn’t think when Newt Gingrich said the best, first thing to do is pass my repeal of ObamaCare bill, I’m going to fall for that one. That was a good answer,” King said, laughing. “But, not from a substantive way, nothing made it real clear to me.”