You are here: Home / Military / U.S.S. Iowa awarded to Los Angeles based group 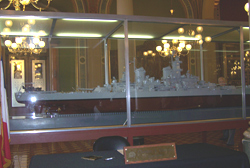 A model of the U.S.S. Iowa is on display at the state capitol.

The U.S.S. Iowa is finally ready to move out of its military status to a final port where it will be retired to a life of tours and tales of past battles. Secretary of the Navy, Ray Mabus, announced Tuesday that the Iowa would be donated to the Pacific Battleship Center near Los Angeles.

The center’s president, Robert Kent, heard the news in a conference call along with other members of the non-profit group.

“I can tell ya, we were absolutely elated, this is so fantastic for our people here,” Kent said. He says the announcement will also make the former crewmembers of the battleship happy as well as many supporters.

Iowa’s governor and legislature got behind the effort to keep the Iowa from the scrap heap. Kent says they would not have been able to get the ship without the State of Iowa’s $3-million contribution.

The Pacific Battleship Center was vying against another group that also wanted to turn the battleship that began its service in World War Two into a museum. Kent says the next task is to get the ship towed from its dock in San Francisco to its new home.

Kent says finding a suitable berth with deep enough water was a challenge, but he says the Port of Los Angeles has allocated a huge berth right next to the world cruise ship terminal. He says the berth won’t have to be dredged and it has plenty of parking nearby.

Kent says there won’t be much work to be done on the ship itself. He says the ship was modernized in the 1980’s to make it safe and he says it will stay pretty much the same as it is now. Kent says the total cost of acquiring the Iowa and turning it into a museum is nine-million dollars. He says they are still taking donations.

He says you can become a plank owner right up until they open the ship, and they will have a special party for plank owners the day before they open up the ship. Kent says they hoped to have the ship open as a museum next fall.

The Iowa was the namesake for a class of battleships and among its missions, it carried President Franklin Roosevelt to the Teheran Conference during World War Two. It also served in the Korean War, and taken out of service for a time before being refurbished and put back into action in 1984.

An explosion aboard the ship in 1989 killed 47 sailors. The ship was decommissioned again in 1990. Find out more on the Pacific Battleship Center’s website at:www.pacificbattleship.com.