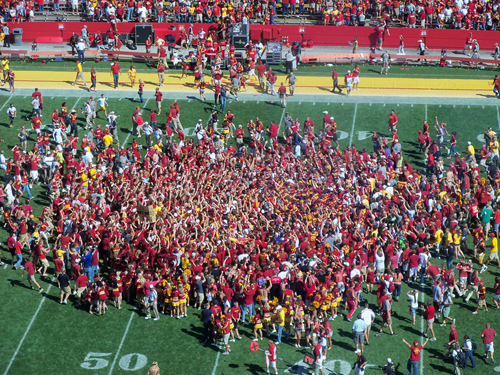 ISU fans swarm the field after the Cyclones downed the Hawkeyes 44-41 in 3 overtimes.

Iowa State quarterback Steele Jantz gave the Iowa defense fits all day long and for the second week in a row led his team to a comeback as the Cyclones downed the Hawkeyes 44-41 in three overtimes.

The Cyclones took the opening kick and drove the ball down the field before turning it over at the five yard line with a botched snap. Jantz said they didn’t give up even when things didn’t go well.

He says they kept focusing on the task at hand and knew if they had to go out again they would take it one play at a time and says they just kept doing that over and over again. Jantz says he was confident when the defense held Iowa to a field goal in the third overtime that they would win.

Jantz says the offense has a meeting on the sideline and they decided they were going to score and weren’t going to settle for a field goal. “And we were able to get it done,” He said. Jantz rallied the Cyclones last week to beat U.N.I. after playing poorly in the first three quarters of that game. He says there isn’t any one thing that changed to make him play better.

Jantz says when he makes mistakes he tries and makes it the last time he does it and he says there are plenty of mistakes to learn from in this game and hopefully he will continues getting better. Jantz finished with 279 yards passing, four touchdowns and no interceptions.

The win broke a three-game I.S.U. losing streak in the series, and was the first for Cyclone coach Paul Rhoads. Rhoads admitted he usually isn’t at a loss for words, but said he had trouble talking to the team after the win. “Because of the unbelievable performance, not just one team but two teams out there, on a hot day, the sun beating down the whole time, the weight of the state on all their shoulders.,” Rhoads said, “and our football team overcame unbelievable adversity you don’t turn the ball over three times to one, twice inside your ten, miss two field goals, and win against a program like Iowa, unless you have the resolve of the young men that I coach.”

Rhoads says his team has been able to overcome the ups and downs during the first two games. He says they have a “peak and plateau” team that hits the highs and when things go against them, they bounce back up. Rhoads says they would not have won the game if they didn’t do that. Iowa coach Kirk Ferentz said Iowa State deserved the win and said his team did not do a good job of containing Jantz, along with some other problems.

Ferentz says if you let the quarterback out of the pocket it’s going to be tough, but he says they have to get better in all phases, from offense to special teams. Hawkeye quarterback James Vandenberg threw for 207 yards and two touchdowns. He says they didn’t give up, but Iowa State made one more play.

“All the credit goes out to them, they played great on both sides of the ball,” Vandenberg says. And he says his team battled from the first snap all the way to the last play. It was the first time starting the game against the Cyclones for the Keokuk native. He says it was unlike any of the intrastate matchups he remembers.

“I don’t remember any of them quite this epic down to the end, but it was a great experience, it’s something I’ll never forget, and obviously I wish we would have come out the other side, but all the credit goes to them, they played great all day.”

Iowa State moves to 2-0 on the season and travels to Connecticut next Friday. Iowa returns home to face Pittsburgh next Saturday.