You are here: Home / Sports / Cyclones have to put Iowa win behind them in short week 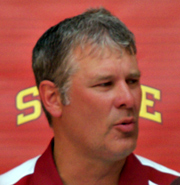 Iowa State coach Paul Rhoads says the Cyclones need to move on to the next challenge but they won’t have as much time to do so. I.S.U. returns to action on Friday night with a visit to UCONN.

The Cyclones are coming off a 44-41 triple overtime win against Iowa and Rhoads says they cannot afford to celebrate too long. Rhoads says it’s a challenge you can’t put your head in the sand about and he says he did right away. He says he gets a number of texts after every win and he says that is magnified after a big win over a rival and all the players are getting the same thing. He says they have to forget about them can go back to work.

Rhoads says Friday’s game is a chance to build even more momentum. “The team believes in what we’re doing right now and how we’re getting it done,” Rhoads says. He says they will have a good week of preparation, but they are playing a late game on the road and that presents new challenges.

I.S.U. quarterback Steele Jantz has been named the Big 12 offensive player of the week. Jantz passed for 279 yards and four touchdowns in Saturday’s victory and his ability to scramble has become a huge weapon for the Iowa State offense. Rhoads says it’s hard on defenses because you have to prepare for him to scramble to run, and scramble to throw, and he says that has been very important to their success through the first two games.

Rhoads says the Big East is an underrated football conference, and he says the bowl record of the conference in the time he spent there proved that. Rhoads says this will be a difficult week of preparation for the Iowa State defense because UCONN uses three quarterbacks. He says you only have so much time to work at what you are going to see, and with a short week that makes it tougher.