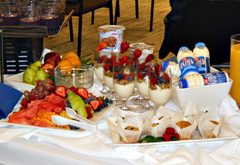 Wellmark Blue Cross and Blue Shield plans to designate 10 Iowa communities as “Blue Zones” over the next five years, sending in consultants who will show that city’s residents 108 different ways to life a healthier life.

Wellmark will conduct an on-line “webinar” on September 27 to let Iowans learn more about the “Blue Zone” project.

The governor says he’s endorsing the private company’s initiative in hopes of getting Iowa to his goal of being the healthiest state in the country.

“We are not trying to pass a bunch of restrictive laws,” Branstad says. “What we are trying to do is demonstrate the opportunities to live a healthier lifestyle, something that’s better for people themselves.”

“We don’t come imposing anything,” he says. “What we bring is 108 evidence-based interventions, some of them are policies, that have worked elsewhere at lowering obesity rates or lowering cardiovascular disease.”

According to Buettner, making streets and sidewalks safer for pedestrians and bicyclists can raise the physical activity of residents in the area by as much as 40 percent.