You are here: Home / Fires/Accidents/Disasters / DOT hopes to reopen I-29, I-680 in a couple of months 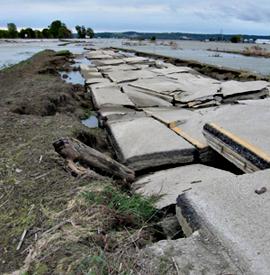 Iowa transportation officials want to get traffic moving again on Interstates 29 and 680 in the southwest corner of the state. Wide sections of the road were reduced to rubble in this summer’s Missouri River flooding.

Bob Younie, a maintenance engineer at the Iowa Department of Transportation, says he’d like to see both highways reopen within a couple of months.

Younie says, “We’re going to do everything we can, everything that’s reasonable within our power, to make sure that happens and I’d like to think we could make that happen this year but that’s not a promise.” Iowa D.O.T. spokeswoman Dena Gray-Fisher says I-680 is being given a priority due to the amount of damage.

“This will be a very accelerated plan,” Gray-Fisher says. “The goal is to try to get the roadway open as quickly as possible. That may even be yet this year.” She says crews will reconstruct the road using the original blueprints and no changes will be made.

Gray-Fisher says, “It will be as built and that means contractors will get a hold of the original contract design and will rebuild it the same way.” She says this isn’t going to be an easy task as the damaged concrete will have to be removed and then they’ll start from scratch.

“It’s very aggressive in the fact that the roadway is totally destroyed and is going to have to be completely rebuilt,” Gray-Fisher says. An emergency bid letting is set for September 21st. Also, the last segment of pavement on Interstate-29 north of Council Bluffs emerged from the flood water on Tuesday.

Crews continue to remove debris from I-29 and now will be able to get a good look at repairs that need to be made. Gray-Fisher says while repairs are needed, I-29 withstood the flood fairly well.