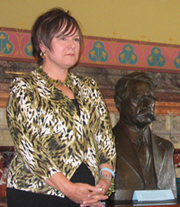 Governor Branstad has appointed 11 people to serve on the newly formed Economic Development Authority board to guide his “public-private” partnership approach to boost business activity in the state.

Durham says the new incentive program will be “ready to go” by January. One of the final Values Fund awards handed out Thursday includes $3 million in direct financial assistance to help Alcoa with the expansion of a plant in Davenport, creating 150 jobs. Durham says state incentives are critical to keeping companies like Alcoa from moving jobs elsewhere.

Alcoa officials say the improvements to the Davenport facility will cost $300 million. The agency that’s replacing the Iowa Department of Economic Development is being called the Iowa Partnership for Economic Progress, or I-PEP. Branstad says the board that will guide I-PEP will hold its first meeting October 20.

“Having the benefit of both the public and the private sector, and having visionary business leaders involved in this process, I think it’s going to make it even more effective,” Branstad said. The new board includes three members from the now-dissolved DED board. Branstad says job creation efforts will continue between now and January, when the new incentive approach is expected to be in place.

“I feel confident that we’re going to make this a seamless transition,” Branstad said. “And hopefully the new system will be less cumbersome and more effective. And even though we may not have as much resources for direct grants, we want to make sure it’s focused on those things that are going to get us the best quality jobs and grow the economy.”

The governor has set a goal of creating 200,000 new jobs for Iowans and raising family incomes by 25%.