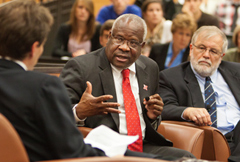 A U.S. Supreme Court justice is talking with high school students in Omaha/Council Bluffs today and insists he doesn’t hold fast to a single judicial philosophy and that the courts have taken on too much.

Justice Clarence Thomas rejects suggestions he’s a follower of originalism in interpreting the Constitution. “I am a follower of get-it-rightism,” he says, bringing laughter from law students at the University of Nebraska-Lincoln.

Thomas says it’s important to understand what is meant in the original document, what the words mean. “It’s a Constitution that’s written in words,” he says. “What, do people think it’s written in symbols? You need to say you’re a textualist. What else am I supposed to do, use a Ouija board, chicken bones?” He says the media pundits’ coverage of the Supreme Court is off-base.

“Most of the commentary I find to be irresponsible and not very helpful,” Thomas says. “It’s unfortunate, because what we do, whether you agree or not, is very, very important.” Thomas criticizes elite law schools for leaning left and breeding cynicism. He says his travels, especially in the Midwest, give him hope.

“It really helps to go see that other people are doing things, that they actually believe in their country, that they actually want it to work, that they’re willing to sacrifice,” Thomas says. “That’s what I hear. I think we dishonor them when we go inside that Beltway and we become a tower of Babel and only talk to each other in a sort of cynical, smarmy way.”

Thomas, who enters his 20th year on the nation’s high court next month, says the courts have become too involved in too many things. “I don’t know about all of these big moral questions any better than anybody else,” he says. “Unless I have a law to deal with, I think we’re off our terrain.”