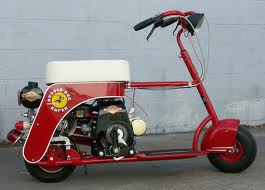 People who loved a little motor scooter called the Doodlebug decades ago are gathered this weekend in Webster City, the town where the sturdy machines were made in the late 1940s.

Vern Ratcliff of Webster City is helping organize the 25th annual Doodlebug Reunion. A good turnout is expected as it’s also the 65th anniversary of the Doodlebug’s first year in production.

Ratcliff says the pint-sized scooters were a big hit some 60+ years ago. They were built at the Beam Manufacturing Plant in Webster City from 1946 to 1948.

The plant had been making washers and driers. The factory later became Electrolux Home Products, which shut down production in March.

Ratcliff says the reunion will feature parts vendors and even an escorted ride through town for the dozens of scooter lovers.

“They really enjoy riding and touring the town and seeing the layout of the city,” Ratcliff says. “We have people from all over the country so it’s new to them.”

Events are underway at the Doodlebug Reunion at the Hamilton County Fairgrounds through today.