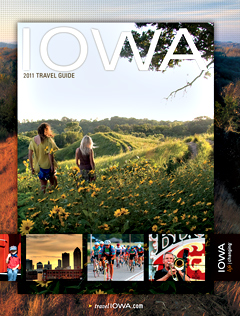 Fans of the page can vote for their favorite image between now and October 18.

O’Riley says the choices involve canoes on the Cedar River in Linn County, a shot of the High Trestle Trail near Madrid and Arnold’s Park in Okoboji surrounded with smaller photos of a Mississippi River Sunset, Whitewater Park in Charles City and the Iowa Speedway in Newton.

The winning cover will be announced on October 19. The Iowa Tourism Office’s Facebook page has just over 2,200 fans. That’s likely to increase because of the contest. “We’re really hoping it generates a lot of community support,” O’Riley said. The 2012 Iowa Travel Guide will include 184 pages featuring 700 attractions.

Anyone can sign up to receive the travel guide in the mail for free. They’ll be mailed in January. The guide is also available for viewing online at www.TravelIowa.com.