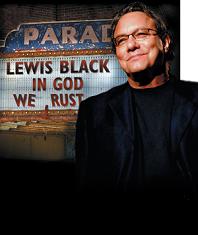 One of the nation’s highest-rated and top-grossing comedians is making one stop in Iowa later this week. Lewis Black is known for his anger-fueled rants, skewering anybody who annoys him, which is just about everybody from the president to the grocery store checker. Topics that used to be conversational taboos, like politics and religion, are the frequent targets of his tirades.

He’s dubbed this the “In God We Rust” Tour, his first appearance in Iowa since April of 2007. Black says, “I’m told a lot that I say things that people think and I don’t even know if I say things that people think as much as I express frustration that has been around from the time I started touring which is 20 years ago.” In a telephone interview with Radio Iowa from his home in New York City, Black says his creed is one of a “pissed-off optimist,” which may sound contradictory, but he insists it works.

“I mean, you can’t get this angry unless you believe it could be set right,” Black says, chuckling. For 15 years, Black’s been a staple on “The Daily Show,” on TV’s Comedy Central network. It’s said, more young people get their news from the show’s host, Jon Stewart, than any other source. Black says he’s not worried by the implications in the statistical ratings boast, even though the program isn’t a “real” news program.

“What’s good about that is that they at least are looking for news somewhere,” Black says. “When you get CNN and Fox as your options and MSNBC, I mean, we don’t look so bad. We look pretty good. I do think what (The Daily Show) gives kids is a way to look at the news with a jaundiced eye and I think that’s important.” Black turned 63 last month and says he sees himself as an advisor to the target demographic of 18-to-49-year-olds.

“What I really am trying to do is pass along information to the younger generation that I didn’t seem to be getting as a child,” Black says. As for the current crop of presidential hopefuls, Black says he’s never been so “appalled.” He compliments Iowans for their continuing role in separating the political wheat from the chaff, though at the moment, he says it’s all chaff and there doesn’t appear to be any wheat.

He offers all candidates equal venom, saying, “Republicans are a party with bad ideas and Democrats are a party with no ideas.” Lewis, who was born in Washington D.C., says he has confidence the right person will win the presidency in 2012. “I have a great faith in the American people,” Black says. “Otherwise I wouldn’t be wandering around the country like a nomad half the time. I trust them much more than I trust any of these people that talk to them.”

The Maryland native was asked if he ever found himself at conflict for who he’d like to see win the White House as far as who he thought would be best for the country versus who’d provide the best comedic material. Never, he says, “or I would’ve spent my life trying to get Dan Quayle into the presidency.”

Black is a best-selling author with three books in print, pointing out the world’s absurdities. He’s had four TV specials, produced six comedy CDs, won Best Male Stand-Up at the American Comedy Awards and won his second Grammy Award with his most recent CD “Stark Raving Black” for Best Comedy Album. He appears at the Civic Center of Greater Des Moines on Saturday.

For more information on his comedy, visit: www.lewisblack.com, or for the show: www.civiccenter.org.