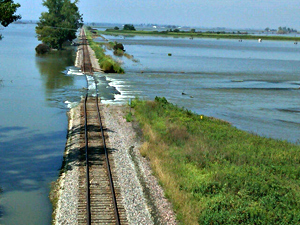 Democratic Congressman Bruce Braley accuses Republicans of using disaster victims as “pawns” in the fight over the federal budget.

Fifty Democrats and 10 Republicans in the U.S. Senate have passed a bill that provides the stop-gap spending for the nation’s disaster recovery programs, but the Republican-controlled U.S. House is poised to insist this week on making deep cuts in a program Democrats support to pay for that disaster relief.

“Flood recovery has, like most things, become a partisan bargaining chip in Washington and will be used as a pawn in the budget negotiations,” Braley said this morning during a telephone conference call with reporters. “There’s even been threats of another government shut-down and this is deplorable.”

Congress has not passed a budget for the next federal fiscal year, which begins October 1. Braley said federal disaster aide for this summer’s flash-flooding in Dubuque and Jackson Counties as well as the Missouri River flooding is at stake, along with federal funds for disaster-related projects that date back to the flooding in Iowa back in 2008.

“Helping people get back on their feet after a disater is one of the basic functions of government,” Braley said. “It shouldn’t be a political issue bogged down in Washington politics. It needs to get done and it needs to get done now.”

Braley said while most Americans are well aware of the flooding which struck the east coast because of the recent hurricane, few realize Midwesterners who live and work along the Missouri River have been dealing with flood woes since June.

“(It’s) probably the longest-sustained flooding event in the history of the United States,” Braley said. “It shouldn’t be subject to political gamesmanship…and that’s why I’m calling on my colleagues from both sides of the aisle to find a way to get it done and not make it another political football which is why…people in the United States have become so disenchanted with the way things work here in Washinton.”

Braley’s Aunt Mary has been out of her home in Percival, Iowa, for three and a half months because of the Missouri River flooding. Braley visited the area on August 31 and posted some photos on Twitter. Braley described Percival as a “ghost town” with “water and mold everywhere.”