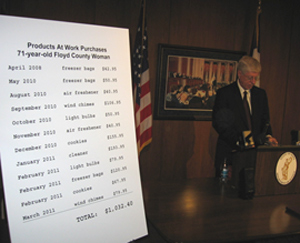 A Virginia based for-profit telemarketing company has agreed to stop calling Iowans.

The agreement requires the company to make a $5,000 payment to the state. Miller said $4,000 will be used to compensate Iowans who made multiple purchases from Products At Work.

The remaining $1,000 will go to the state’s elderly victim fund.

“Unfortunately, many of these people who are repeat victims are elderly,” Miller said. “They are more vulnerable to some of these pitches, they’re home more often and they’re isolated to some extent.” Miller alleged the company violated Iowa’s Consumer Fraud Act by misrepresenting how they would use the money collected from selling various products.

A Consumer Protection Division undercover phone line recorded several Products At Work calls placed to Iowa. In each call, a company representative claimed to be a volunteer and that 100% of the company’s proceeds benefit paraplegics and amputee victims. Miller said both claims weren’t entirely true.

And a 66-year-old Clayton County woman placed ten orders for nearly $500 in just over a year and-a-half.