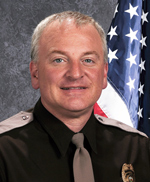 The information includes two 9-1-1 calls placed shortly after the crash at 4:40 p.m. One caller stated, “I just saw a cop go in the ditch and he went in it pretty fast.” Trooper Mark Toney died in the crash as his squad car rolled into a field and burst into flames.

The 43-year-old Toney had just started his shift at 4:00 p.m. Witnesses said the car’s emergency lights were flashing when it left the highway, but investigators say there was no communication between State Radio and Trooper Toney indicating his actions just prior to or during the crash.

The in-car camera retrieved from Toney’s vehicle did not contain audio or video pertaining to the crash. An autopsy was conducted Wednesday but results are still pending. A press release states the official cause of the crash is still undetermined.

It marks the first death of an Iowa State Trooper in the line of duty in 21 years.

Toney’s funeral is scheduled for Saturday in Ankeny.

The Department of Public Safety released these  details on the funeral arrangements for Trooper Mark Toney: