“People are tired of being told that, you know, these are the only two candidates they get to choose from, because they’re not particularly happy with either of those two candidates,” Santorum said today in Des Moines, “and they’re looking for somebody else.”

Former Godfather’s Pizza C.E.O. Herman Cain won this weekend’s Straw Poll in Florida. But Santorum, who finished fourth in the Florida voting — behind Perry and Romney, suggests Cain has a fatal flaw: a lack of experience in the political arena. 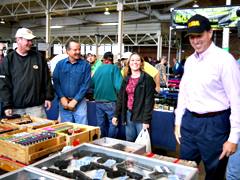 Rick Santorum at a gunshow in Des Moines.

“We’ve been through learning-on-the-job-training presidents and we’re going through that now,” Santorum said. “I just don’t think it’s a good idea to put someone in there who just doesn’t have any experience.”

Santorum spent 16 years in the U.S. House and Senate, representing the state of Pennsylvania. Santorum said he’s spending “virtually nothing” as he campaigns for president, but is still competitive with well-financed candidates.

“I don’t spend a lot of time on fundraising to be honest with you because I know this sounds crazy, but it’s not that important to me.  What’s important to me is to get out there and meet a lot of folks,” Santorum said.

“I really have the Iowa campaign. I mean, if you build it they will come and I’m doing that…and I’ve not focused on spending a lot of time raising money. For someone in my position, it’s just too hard. I need to keep my expenses down and I’ve got to be the Energizer Bunny candidate.”

Santorum told reporters that if he’s able to “break out of the pack” with solid showings in Iowa, New Hampshire and South Carolina, the “smart money” will flow into his campaign coffers.

“I’ve said this from the beginning,” Santorum said. “Slow and steady wins the race.”

AUDIO of Santorum speaking with reporters. 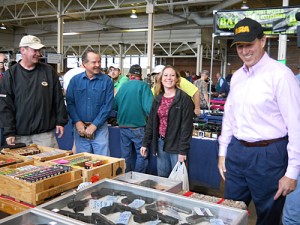 Santorum spent part of Sunday afternoon walking through a gun show on the Iowa State Fairgrounds and visiting with vendors.  Two Santorum supporters from eastern Iowa drove to Des Moines to touch base with the candidate. Lynne Boston of Davenport has had a Santorum sign in her yard all summer.

“I like the fact, most of all, that he’s somebody that has integrity, that doesn’t move with the wind,” Boston said. “He stands for what he stands for.”

Karen Fessler of Coralville said she doesn’t agree with Santorum on everything, but she agrees with him on the most important issue facing the country.

“What impressed me the most when I sat down and talked to him for the first time is when he was starting to talk about the best way to get the economy moving again is that we have to start making things in this country again,” Fessler said. “…He’s right. You know, the whole middle class has disappeared because our manufacturing sector has.”

As Santorum walked through the gun show crowd, he shook hands with Dick Bice who was wearing a red Michele Bachmann t-shirt.  Bice, who dashed over to a Santorum volunteer to ask for a Santorum bumper-sticker after he shook Santorum’s hand, called Santorum his fall-back candidate.

“I think this guy’s pretty darned nice and I would back him if Michele loses out like she ended up last place in Florida,” Bice said. “But I’m going to work hard for her to win Iowa.”