You are here: Home / Health / Medicine / Health experts talk at “State of Weight in Iowa” conference 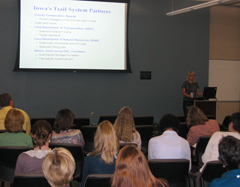 State of Weight in Iowa conference.

Around 200 people from across the state attended a conference in Des Moines today to discuss Iowa’s growing obesity problem.

Matt McGarvey, with The Wellmark Foundation, says a recent study found just over 28% of adult Iowans are obese. That compares to 16.2-percent in 1996.

“It’s not something that just happened overnight, I mean, this is 30 years in the making,” McGarvey said of Iowa’s obesity rate.

“From a community design standpoint or from people changing whether they’re being as active as they could or should be…it’s literally something that has gotten progressively worse since the early 1980s up until today.”

Those who attended the “State of Weight in Iowa” conference heard from several national experts on health. McGarvey says one of the goals is to get community leaders thinking about ways to encourage their local residents to eat better foods and lead more active lifestyles.

He says communities can make policy and environmental changes to help residents make healthy choices. The Wellmark Foundation provides funding to nonprofit groups and cities to establish health initiatives in their communities. McGarvey says this inaugural conference allowed those groups and community leaders to share ideas.

“So, a day like today really helps communities begin to think about what’s possible for them to do in their own setting,” McGarvey said. “That will then, hopefully, make their funding proposals – whether it’s to us or to other organizations – that much more competitive because they’ve been exposed to different ideas that have been successful in other community settings that they can begin to replicate.”

Earlier this month, Wellmark launched the “Blue Zones Project.” The insurance company plans to designate 10 Iowa communities as “Blue Zones” over the next five years, sending in consultants who will show that city’s residents ways to live a healthier life.