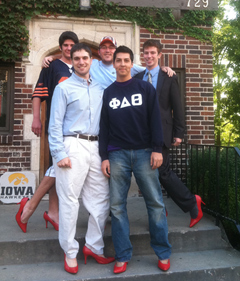 U-I students don high heals for Walk a Mile in Her Shoes event.

University of Iowa students and others in the Iowa City community will be having some fun Saturday while addressing a serious issue.

The “Walk a Mile in Her Shoes” event will feature men wearing high heels and walking one mile to raise awareness and funds for the Rape Victim Advocacy Program based in Iowa City.

The walk is being organized by U-I senior Billy Davies and other members of the Phi Delta Theta fraternity. Davies says, unfortunately, rape, sexual assault and gender violence have been problems on the U-I campus in recent years.

“It’s a serious issue and I just thought it was something maybe people could get behind,” Davies said.

Started in 2001, Walk a Mile in Her Shoes is a now a world-wide organization that has raised millions of dollars for local rape crisis centers and domestic violence shelters. The first march in Iowa City is set to begin at 1 p.m. Saturday in front of the Old Capitol building.

Davies and more than two dozen other members of his fraternity have purchased four-inch high red stiletto heels. Davies admits they’re a little uncomfortable. “They’re not too bad, but I can’t imagine wearing those on a daily basis or walking really long distances in them. I think that’s sort of the point,” Davies said. Participants can register on site, but are encouraged to preregister at the Iowa Memorial Union box office.

The registration fee is $15, with discounts available for teams of five and 10 ($70 for a team of five, $120 for a team of 10). Anyone who registers must sign a liability waiver. “God forbid, I don’t think anyone’s going to hurt, but just in case somebody rolls an ankle or something…it’s just a precaution,” Davies said. The liability waiver is standard policy for any event involving the university.

Those who preregister will receive a t-shirt. Women are also encouraged to participate in the walk, though Davies says only men are asked to wear heels. An educational program will immediately follow the walk. Organizers are hoping to raise $1,500 to $2,000 for the Rape Victim Advocacy Program.