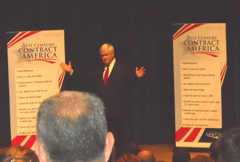 “It’s an effort to lay out for people what we need to do in a way that we can all understand as citizens,” Gingrich said, “and we can put it together.”

Gingrich was the architect of the 1994 “Contract with America” that he says was a “management document” for what Republicans did in January of 1995 when they took over the U.S. House. The new “Contract” Gingrich has drawn up is much longer, but still includes some of the same goals, like a balanced budget.

“This contract is designed in a much deeper way,” Gingrich said this afternoon.

Gingrich plans to hold on-line discussions about the new document, with the goal of coming up with a final version a year from now.

“This is the essence of, hopefully, the next 10 years,” Gingrich told reporters. “I think it shows you the direction I think the country has to go. It shows you how I think we could get there.”

Gingrich called it an “adult document for adults” and suggested his new “Contract with America” will separate him from his competitors for the GOP’s presidential nomination.

“I think that we are in the kind of trouble as a country that puts a premium on having solutions rather than slogans,” Gingrich told reporters. “And I think this is going to be a unique election in which people really are worried and they really do want to know, ‘What would you do?’ and, ‘How would you do it?’ and, ‘Why should I believe you?’ And I think this is the beginning of laying that out.”

Gingrich plans to meet with Republican activists at Iowa GOP headquarters tonight before going on-line to chat with Tea Party activists about his ideas.

Read a live blog of the event.