You are here: Home / Human Interest / Massive quilting show has central Iowa all sewn up 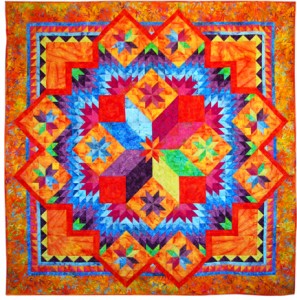 This is the final day of an international quilt show in central Iowa that’s drawn some 20,000 quilting enthusiasts from around the globe.

“There are Victory Quilts,” Browning says. “Everybody had Victory Gardens and lots of things had Vs on them in World War II so there are quilts that commemorate that part of the war. There are others that are signature quilts where people did it as fundraisers to earn money for things related to the war so they have signatures on them.”

Hundreds of colorful quilts are being shown at the massive exhibition in Des Moines.

“We have more than 1,000 quilts on display,” Browning says. “We do four shows a year and this is the largest in numbers of quilts that we do anywhere, so that’s why the quilters come from all over the country and around the world.” 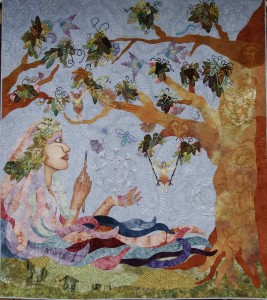 Another feature is a quilted yurt, a sort of tent-house, created by a quilter in Scotland, which was a sensation in European quilting shows. This is the first time it’s been seen in the United States.

The venue is also the showcase for winners in a quilting contest, with $44,000 dollars in cash prizes. Browning is expecting this year’s attendance to at least match last year.

“We have about ten countries represented on our registrations and we typically have 40 to 45 states here in the U.S. represented,” she says, “so this is very typical that we draw from all over the world.”

The event features a merchant mall with the latest quiltmaking supplies, new and antique quilts, quilt-related gifts and more.

The show opened Wednesday and is underway through this evening at the Iowa Events Center in downtown Des Moines. Learn more at: www.AmericanQuilter.com or www.iowaeventscenter.com