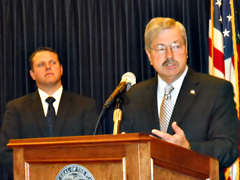 Governor Branstad and two of his top education aides have unveiled a “blueprint” for education reform which Branstad hopes will make Iowa’s schools the nation’s best and among the 10 best school systems in the world.

Linking teacher pay to performance is one of the proposals, along with a new, expedited process for removing what Iowa Department of Education director Jason Glass calls “ineffective” teachers.

“We are saying that performance matters and that there are differences in educator quality,” Glass says. “And we should be recognizing that and making job protection decisions and promotion decisions based on effectiveness.”

The governor also is touting a new initiative to ensure third graders can read before they may go on to fourth grade.

“Instead of spending all our time fighting over the issues of the past, we really want to focus on the things that will make a difference and systemically reform and improve Iowa’s education system,” Branstad says.

There is no price tag for the plan. “First we want to develop a consensus with regard to the policy and then once we’ve got a consensus on the policy, we will determine what the dollar costs are,” Branstad says. “….We’re already investing a significant share of the state budget on education. We want to make sure that the dollars we’re investing in education are focused on those things that are going to improve student achievement.”

That means schools may be asked to reallocate money rather than count on new dollars from state taxpayers to achieve all these new objectives.

Branstad, Lieutenant Governor Kim Reynolds and other Branstad administration officials plan to hold town hall meetings around the state to gauge reaction to the plan. The governor intends to present a final version of this “blueprint” for education at year’s end so the 2012 Iowa Legislature can take action.  Branstad will ask legislators to pass the entire package.

“We don’t want to cherry-pick just a few things because this group or that group likes ’em,” Branstad says. “We want to try to do this in a comprehensive whole.”

Branstad says he’s trying to build bipartisan support of the plan, so it will be implemented over the long-haul and won’t be abandoned in a few years.   Read a live blog and listen to a 56-minute briefing from Glass and Linda Fandel, Branstad’s “special assistant” on education policy.  The governor and lieutenant governor held their weekly news conference immediately afterwards and focused exclusively on the education initiatives.