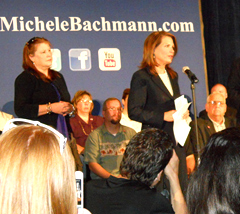 Republican presidential candidate Michele Bachmann met publicly with a group of about two dozen Iowa pastors and religious conservatives today and got a collective “Amen” from the group when she again urged conservatives not to “settle” in 2012.

Pastor Mike Demastus of the Fort Des Moines Church of Christ described himself as a “values voter” who feels issues like abortion and gay marriage are “denigrated” by the political elite.

“One of the reasons we’re in the economic mess that we’re in is because we’ve lost our moral way as a nation,” he said. “And I appreciate candidates like Michele who will put these issues on the forefront for us.”

According to Pastor Bill Tvedt of the Jubilee Family Church in Oskaloosa, a candidate’s stand on abortion can “swing” values voters.

“It is very much a determining thing for those who do hold that value,” Tvedt said.

Bachmann quickly amplified on the pastors’ comments, suggesting Christian conservatives are too often “patted on the head” for doing the grunt work of campaigns and told to “settle” for a moderate Republican as the party’s presidential nominee.

Earlier today Bachmann visited the “Informed Choices Medical Clinic” in West Des Moines which provides a free ultrasound to women with an unplanned pregnancy and medical referrals to doctors who oppose abortion.  As she met with the pastors, Bachmann described the visit to the clinic and her public media event afterwards as an effort to ensure the abortion issue doesn’t get forgotten as the campaign focuses primarily on economic issues.

“We can’t forget what truly is the foundational issue which is the right to life,” she said. “And I have always stood for that right and as president of the United States I will stand for life from conception until natural death.”

One pastor who did not identify himself said if a president “is willing to compromise on life, you can’t trust them with your money.”

Bachmann promised not to compromise.

“You can get a lot of things wrong, but you can’t get life wrong and that’s why in this particular election it’s important that we not settle, we not settle for a candidate who doesn’t stand up for life,” she said. “It’s very important that our candidate represent both the pro-life cause and standing up the sanctity of the family and of the home.”

At the end of the event in Des Moines, Bachmann addressed questions about fundraising for her campaign. Bachmann told reporters she had 250,000 donors and the average donation was $50. Her campaign spokeswoman quickly told reporters Bachmann “misspoke a teeny bit” and the quarter of a million donors were contributors dating back to all of Bachmann’s campaigns for congress as well as the current presidential campaign.