You are here: Home / Fires/Accidents/Disasters / Final section of I-29 to reopen soon 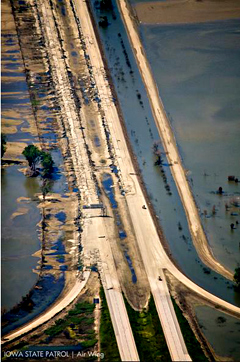 After months of flooding and weeks of repairs, the final restored section of Interstate 29 should reopen to traffic later this week. Large segments of the roadway were washed over by the flooding Missouri River back in June and remained underwater much of the summer.

Dena Gray-Fisher, at the Iowa Department of Transportation, says construction work is almost complete. “The Iowa DOT will be opening I-29,” she says. “We are very optimistic that we should be able to get that section open from the Missouri state line all the way up to U.S. (Highway) 34.”

Once the 34-mile section reopens, it will be the first time since June 15th that drivers have been able to utilize all of I-29 through Iowa. Gray-Fisher says there is a crossover in place in southwest Iowa and two-way traffic for a bit.

“There will be some two-lane area,” Gray-Fisher says. “It’s going to be close to Hamburg and that’s to avoid a bridge that has had some damage.” Several on-ramps and off-ramps remain closed as well.

That exit leads to the bridge over the Missouri River to Nebraska City, Nebraska. Gray-Fisher says Iowa Highway 2 sustained substantial damage in the flooding and must be repaired before traffic is allowed to return.