For Iowans who love presidential politics or for those who want to learn, an exhibit focusing on the Iowa Caucuses reopens today at the State Historical Museum.

Jeff Morgan, a spokesman for the Des Moines facility, says the popular exhibit has been fully updated as we approach the 2012 elections and Iowa’s key, first-in-the-nation role on the road to the White House.

“It opened originally in October of 2007,” Morgan says. “It’s an exhibit that explores the history of the Iowa Caucuses, primarily from the time they rose to national prominence in the 1970s all the way up to the 2008 Caucus cycle and presidential election process. We’ve updated it with a lot of information from the Obama/McCain campaign.” 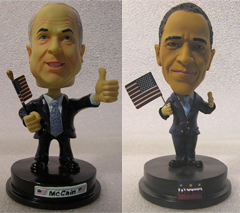 John McCain and Barrack Obama dolls from the 2008 campaign.

The 10,000 square foot exhibit now sports high-tech kiosks. “We have new interactive touch-screen questions that focus on the history of the Iowa Caucuses, a new section that summarizes the 2008 Caucuses and the general election with President Obama and Senator McCain,” Morgan says.

“We have new news footage in the media room, new artifacts we brought up from our permanent collection are now on display.”

Some of those artifacts date back to the 1840s. The exhibit also features modern voting machines alongside some that are more than a century old. “People can see how the process, the inventions, technology advanced through the 1900s,” Morgan says.

“I believe the oldest one we have out there is from 1906. We have one from the 1950s on display and a couple of others.”

The Iowa Department of Cultural Affairs is also launching a new “Caucus Iowa Speakers Series” tonight at the State Historical Building featuring David Yepsen, the former chief political writer at the Des Moines Register. The lecture and the exhibit are free.