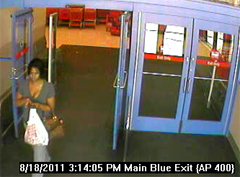 Woman who is a supect in credit card theft in Cedar Rapids.

Police are looking for at least three suspects in a pair of stolen credit card cases in eastern Iowa.

The purchases included clothes, personal items and food. “We’re talking thousands of dollars,” Hamblin said. The credit card was reported stolen in Waterloo on August 31. Since then, the card’s been used multiple times.

Hamblin says the victim in the case has canceled the card. The suspect was caught on camera using the stolen card. She’s described as black, medium height and weight, with should length straight hair. 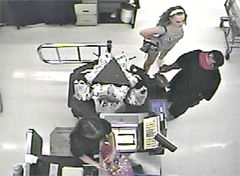 The public is also being asked to help identify two other individuals who used a credit card taken in a burglary on August 28.

A black male, accompanied by a white female, were caught on camera while using the card in Cedar Rapids. Hamblin says the couple left the store in a red or burgundy four-door car, with the woman driving.

It’s believed the pair may be associated with a black female who was wearing a blonde wig when she was captured on camera using a stolen credit card in mid-September.

Anyone with information on the cases is asked to call Linn County Crime Stoppers at 1-800-CS-CRIME.