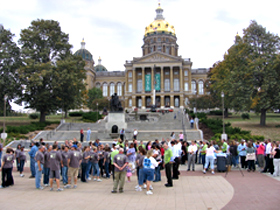 People gather at the state capitol for the "Start Somewhere and Walk" event.

Thousands of Iowans spent part of their lunch hour today outdoors, walking with co-workers, family or friends as part of a kickoff to the Healthiest State Initiative.

“We have a real problem with obesity in this country and our state, right now, ranks 19th of the 50 states in terms of health. We’d like to be number one and we think the only way that’s going to happen is for people to take ownership of their own health,” Branstad said.

The governor was joined by U.S. Senator Chuck Grassley. The 78-year-old Grassley is an avid jogger. He says the Healthiest State Initiative will benefit Iowans in a number of ways. “If people exercise, they’re going to be healthier and it’s going to cut down on the costs of health insurance, out-of-pocket health care and Medicare and Medicaid,” Grassley said.

“This is just the start of a thing that’s going to have a ripple effect beyond just the healthiness of the people of Iowa.” Branstad’s goal is to place Iowa atop the national “Well-Being Index” by 2016.

“We want to make this a challenge. We want to be the healthiest state, but we want other states to compete with us. We think it’s good for the whole country. It’s certainly good for our citizens and we hope many other (states) will take up the challenge,” Branstad said.

The Governor wore a business suit and tie, as well as black dress shoes. “I’ve been working at the Capitol today, so I’ve walked a lot of miles in these shoes too,” Branstad told reporters. “I have some walking shoes and I normally walk two miles at Gray’s Lake most mornings.”

State officials said they hopes to have 250,000 Iowans participating in the walk, which would break Canada’s world record of 231,635 people participating in a simultaneous one-kilometer walk.