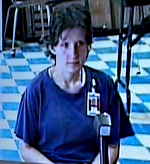 Governor Branstad on Friday denied applications from four prisoners who asked for reduced sentences. One of the commutation requests came from 24-year-old Tracey Dyess. She was 17 at the time she set her home ablaze in Griswold.

She told investigators the fire was intended to kill her abusive stepfather, but instead her siblings were killed. Dyess took a plea bargain in 2005 that makes her eligible for parole in 2022.

She went before the Iowa Board of Parole in July to plead her case for a reduced sentence. “I know I took the plea deal and I know that what I did was wrong,” Dyess told the Parole Board. “I know I killed two innocent people and tried to kill more. I understand I need to be punished for it and I think I already have and I’m going to pay for it the rest of my life.”

Dyess’ mother and her stepfather, Brian Street, escaped the fire. Street was sentenced to 30 years in prison in 2007 for sexually abusing Dyess and her 13-year-old sister, Jessica. Dyess told the Parole Board she wanted to be released from prison before her sentence is up in 2035. “I’m not saying I want out now, but maybe before my mandatory (sentence) is up,” Dyess said. “I did try and kill everyone in the house that night and I realize this and my brother and sister died.”

Parole Board member Thomas Phillips wasn’t swayed by Dyess’ arguments for early release. “In my opinion, you seem to have little remorse in what crimes you committed,” Phillips said. “I think to say simply ‘I’m sorry’ or ‘I don’t know what I would say to those individuals,’ I think personally does not show remorse.” James Felker, another Parole Board member, agreed with Phillips.

“I’m not impressed by statements on your part that you feel you’ve served enough time,” Felker told Dyess.”You don’t seem to be very remorseful, so therefore, my vote is no.” Governor Branstad, following the unanimous recommendation of the parole board, denied a shorter sentence for Dyess.

In his commutation letter, Branstad acknowledged the young woman had a traumatic and abusive childhood. But, he wrote two innocent children died because of her actions, and one crime does not justify another.

* David John Foell, age 43, committed his crime on December 9, 1991 in Franklin County. He is currently serving a life sentence for first-degree murder.

* Yvette Marie Louisell, age 41, committed her crimes on December 6, 1987 in Story County. She is currently serving a life sentence for first-degree murder and three counts of forgery.

* LeAnn Faye Werts, age 41, committed her crime on November 16, 2000 in Polk County. She is currently serving a seventy-five year sentence with a 70% mandatory for Multiple Acts of Child Endangerment and Attempted Murder.