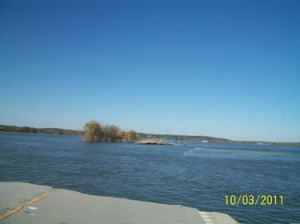 After a full summer of flooding, Interstate 29 reopened last weekend in southwest Iowa, yet repair work is still underway on many miles of other highways and roads.

The Missouri River flood caused tens of millions of dollars damage to thoroughfares in the region. Melissa Black, with the Missouri D.O.T., says there’s a giant hole worn in Route 136 in northwest Missouri, just south of Hamburg, Iowa.

While it’s not exactly the Grand Canyon, she admits it’s going to take a lot of work to fill in the huge hole, dubbed “The Beast” by construction crews.

Three other large gaps in the highway that were carved out by months of rushing floodwaters have already been repaired. “It will take more than 100,000 tons of rock to fill that back up to the regular pavement level, which is about what it took to fill the other three gaps,” Black says.

The contract to tackle and fill “The Beast” is worth nearly $3.5-million and she says it should take another several weeks to complete.

“These other emergency repair projects have been going pretty smoothly,” she says. “The weather’s been cooperating and contractors have been getting done quicker than we were anticipating so we’re hopeful this one will go the same way.”

The target date for completion of work on that gap is November 28th. Many roads that were impacted by the flooding closed in June.