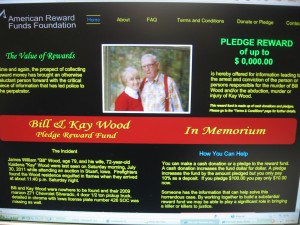 Relatives of a central Iowa couple who disappeared this summer are asking for the public’s help in hopes of solving the case.

The body of 79-year-old Bill “James” Wood was found in the couple’s rural Norwalk home – which was destroyed in a fire on July 30. Investigators said he died of multiple gunshot wounds.

His wife, 72-year-old Kay Wood, remains missing but her family believes she was abducted and possibly killed. No one has been arrested in the case. The Wood’s truck was found the day after the fire in Kansas City, Missouri.

Guy Cook is an attorney for the Wood family, which hopes to raise a $100,000 reward fund. “I know, as a former federal prosecutor, how important a reward fund can be in generating leads and even a small piece of information can be a part of the puzzle that breaks open the case,” Cook said.

Iowans and others can donate to the reward fund through the website www.woodrewardfund.com. Cook says the website allows users to donate cash or pledge money which won’t be collected until there’s an arrest and conviction in the case.

The reward would be given to someone who provides information leading to an arrest and conviction. “I’m convinced that somebody knows something about what happened and a reward will help bring information to the surface to find Kay and arrest (the person) that committed this violent act,” Cook told Radio Iowa.