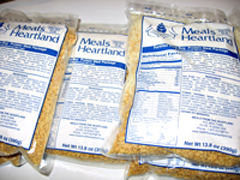 Meals from the Heartland food.

The announcement came Tuesday at the annual Iowa Hunger Summit, which Anastasia Morrisey helped organize. She said the financial donations marked a big increase over the previous year.

The numbers are gathered each year from more than 100 food banks and other organizations around the state involved in food assistance and hunger relief efforts.

Morrisey believes many Iowans find it easier to donate cash rather than volunteer their time or donate food items. She’s hoping more people will consider increasing their volunteer hours in 2012.

“I know that everyone gets a little bit busier and as the years go on, we all start to multi-task even more, but it’s really important to stay involved and to volunteer,” Morrisey said. The Iowa Hunger Summit is part of the World Food Prize festivities taking place in Des Moines this week.