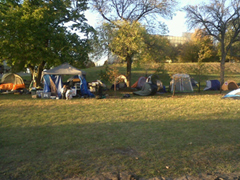 “Occupy Des Moines” protesters have voted to move their round-the-clock camp to a city park that’s a couple of blocks to the east of the state capitol.

The group’s three-day permit to camp on the statehouse grounds expires at 11 p.m. Des Moines Mayor Frank Cownie met with the group just before sunset tonight to extend an invitation to move their “occupation” to Stewart Square, a city park that sits along a busy four-lane Des Moines street.

“We want you to feel like that’s a good place to gather,” Cownie, a Democrat, said to applause.

State troopers arrested over 30 protesters late Sunday and charged them with violating the 11 p.m. curfew for the state capitol grounds. State officials on Tuesday granted the group a three-day permit to camp, but it expires tonight and an extension was denied. The Des Moines mayor promised the protestors they were safe to camp in the city park.

“I want my police force out taking care of the bad guys and arresting criminals,” Cownie said, getting wild cheers and applause from the crowd, who began chanting, “We love Frank.”

Not all the “Occupy Des Moines” protesters supported the move. Justin Norman was among the 32 who were arrested Sunday night.

“I think what this is looking like is that we were intimidated by the state troopers and now we are cowering and asking permission where to stand,” Norman said during the group’s “General Assembly” this evening. “That seems directly in opposition to a forced occupation and this is looking more like a family camp-out to me.”

A man who said his name was Ryan voiced the same concern during the group’s “General Assembly” meeting.

“The mayor came down here to give us a proposal to send us somewhere else, somewhere safe, somewhere out of the way,” Ryan said. “We’re here to defend this yard, to get media attention, to put pressure on that building.” He gestured toward the statehouse.

But the overwhelming majority of the crowd voted to move to the city park.

Scott Kubie of Des Moines urged the move to the city park, arguing it would provide a more permanent meeting place and would build “goodwill” for the movement.

“The occupation continues. We’ll be in Des Moines. We can start to organize, get things accomplished,” Kubie said. “What have we accomplished in five-plus days? Nothing, except having the media talking about us like we’re just a bunch of slobs hanging out here, getting nothing done.”

Frank Cordaro of Des Moines, an ex-priest, is a peace activist who has been arrested a number of times for trespassing on military bases.  He tried to encourage those who were disappointed the “occupation” of the statehouse grounds was ending.

“There’s going to be plenty of opportunities for direct action. It’s going to be a component of what we’re all about because that’s what democracy’s all about,” Cardaro said. “And I’d like to get a shot at some of these financial places.”

At 10 a.m. Saturday the “Occupy Des Moines” protesters plan a march from the statehouse to the “financial district” of Des Moines, ending up at a Wells Fargo building. “Occupy” groups in Iowa City, Mason City, Cedar Falls and Dubuque also have events planned Saturday.