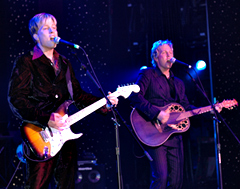 The twin sons of one of the most popular singers of the 1950s and ’60s are staging a tribute show in central Iowa next week.

Ricky Nelson sold more than 100-million records and had 19 songs in the Top Ten, including three number-one hits.

He died in a plane crash in 1985. Sons Gunnar and Matthew Nelson are touring with a multi-media show, “Ricky Nelson Remembered.” Matthew Nelson says it’s an honor to play his dad’s songs.

“We miss him a whole lot less every time we play the show,” Nelson says. “It kind of keeps us grounded and centered and knowing who we are as people and as Nelsons and as human beings.”

He says the ages of people who come to the tribute show are all across the demographic spectrum, from eight to 80. “We can watch our audience transform in front of us, especially people that grew up with him or the family,” Nelson says. “The first song, it’s like, ‘What are we going to see here?’ By second song, they kind of relax, by the third song, they’re a part of the show. By the end, they’re on their feet. As an entertainer, I couldn’t ask for more and for me it’s a spiritual experience. It’s really great.”

He says they had hundreds of hours of film and videotape and pictures from which to choose in creating the tribute show, in addition to a deep catalog of music. Nelson says the process was understandably emotional. “Putting the show together was honestly pretty easy for me because we knew him very well and I really knew his music,” Nelson says.

“Frankly, just naturally, I figured that if I put together a show that I was really happy with, myself, that people would like it and fortunately, it’s worked out that way.” Nelson and his brother are still touring as “Nelson” with their own music, too. Their band rose to popularity in the early 1990s and hit number-one with “(Can’t Live Without Your) Love and Affection.”

The Nelson family landed in the Guinness Book of World Records as the only family to reach number-one record status in three successive generations. Their grandparents, Ozzie and Harriet Nelson, achieved fame with “The Adventures of Ozzie and Harriet,” the longest-running sitcom in television history.

Earlier, the couple had enjoyed big band success and had scored a number-one hit in 1934. Ricky Nelson and his mother, Harriet Nelson, are in the Iowa Rock & Roll Hall of Fame. Harriet Nelson was born in Des Moines. Her given name was Peggy Lou Snyder.