You are here: Home / Crime / Courts / Bachmann “Takes It to Perry” on border fence, education policy 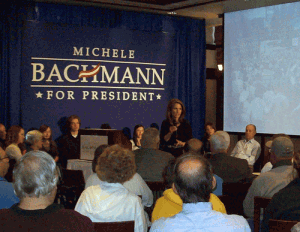 Republican presidential candidate Michele Bachmann went to Perry, Iowa, this weekend for a campaign event designed to highlight an issue Texas Governor Rick Perry has been wrestling with since shortly after he entered the race.

The campaign billed it as a “Bachman Takes It to Perry” rally. The candidate began by signing a pledge. Bachmann promised to build a “secure, double-fence” along the entire U.S./Mexican border. Governor Perry has said it’s “ridiculous” to build a fence along the entire border, but Bachmann said it must be built along “every inch.”

“I have the backbone and I put my backbone up against any other candidate in this race,” Bachmann said. “I will secure that border.”

“Sometimes we’re told it’s not o.k. to talk about illegal immigration, that somehow that means that we’re prejudiced or we’re bigoted or that we’re biased against hispanics, or that we don’t love people that are hispanics or that somehow we have something against Mexico,” Bachmann said. “…That’s not what I hear from the people of Iowa.”

According to Bachmann, Iowans have a legitimate gripe about government benefits that go to illegal immigrants. She focused especially on a policy in Texas, where Perry is governor. The children of illegal immigrants may attend pay in-state tuition at Texas colleges and universities. Bachmann’s views were shared by most in the crowd of about 60 people in Perry, Iowa but she was directly challenged by 32-year-old Eddie Diaz of Perry who argued that in America, children are not punished for the actions of their parents.

“Why would you choose to punish these kids who came here, when they were young, no choice of their own?” Diaz asked.

Bachmann countered that “the average American” is being financially penalized for the choices of those who broke the law by coming into the country illegally.

“That’s a very real cost,” Bachmann said, to sustained applause from the rest of the crowd.

Republican presidential candidate Herman Cain got sustained applause from crowds in Tennessee when he said illegal immigration was a “crisis” and he promised as president he would build an electrified border fence that could kill people who try to cross the border illegally. On Sunday morning, Cain said he was joking about an electric fence.