You are here: Home / News / Romney: “world is a better place” without Gaddafi (audio) 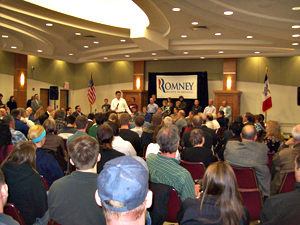 Officials in Libya’s new government announced at a news conference in Tripoli that Gaddafi was dead. Romney was asked about the news as he left a campaign event in Sioux City this morning.

“I think it’s about time,” Romney told reporters. “Gaddafi — terrible tyrant that killed his own people and murdered Americans and others in the tragedy at Lockerbie..  The world is a better place with Gaddafi gone.”

“We have the president right now campaigning, I think he’s in — where is it? – North Carolina today and he’s campaigning for his stimulus. Someone needs to tell him the stimulus is dead, gone, disappeared, invisible. The emperor has no clothes,” Romney said. “…What he needs to do is stop campaigning and stop blaming and go back to Washington and sit down with Democrats and Republicans and work on legislation that will get America working again.”

Romney told the crowd he was a fan of capitalism and the free market. However, Romney also seemed to caution fellow Republicans from being too overzealous in seeking regulatory reform. 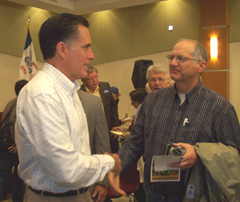 Mitt Romeny talks with a supporter at Morningside College in Sioux City.

“As Republicans, we’ve got to make sure that we don’t pretend like we just want to get rid of all regulation,” Romney said in Sioux City.

“You need regulation to make free markets work, but the regulation needs to be modern and up-to-date, streamlined and the regulators need to be encouraging the private sector, not trying to kill it and right now, our regulatory burden is killing jobs in America and this president has added more regulation, I think by a factor of four times, than the prior president on an annual basis.”

Texas Governor Rick Perry, one of Romney’s rivals for the Republican nomination, has made regulatory reform one of the hallmarks of his campaign.  Last week Perry suggested the federal government should no longer regulate air and water quality, leaving such regulatory decisions to state and local officials.

Romney is due in Treynor today for a midday roundtable with local business leaders. His last stop of the day is in Council Bluffs for a late afternoon “meet and greet” with members of the local chamber of commerce.