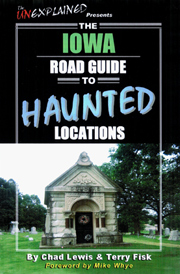 An author who calls himself a “paranormal investigator” will give what promises to be a bone-chilling lecture in Iowa tonight about some of the state’s unexplained mysteries and alleged hauntings.

Chad Lewis has traveled all over Iowa, taking pictures, doing interviews, researching spooky incidents and trying to make sense of them. He’s compiled a book called, “The Iowa Road Guide to Haunted Locations.”

“When you hear stories of people being haunted by gypsies in Algona, you need to go there to see what they’re experiencing, see the atmosphere, see the conditions, and then come to your own conclusion as to whether or not they’re haunted,” Lewis says. “Traveling to these places is half the fun.”

Several spots in Iowa are known for phantom hitchhikers, including near a certain cemetery in Estherville. Lewis says he talked with several people who’ve encountered a spirit-woman on the roadside. “I even had a gentleman who said he gave her a ride and went to ask her where she was going and she had disappeared from his front seat,” Lewis says.

“He was so convinced that she was real, he spent the next hour scouring the countryside looking for her, thinking she must have snuck out.” Lewis investigated the Ghost Train near Boone and the story of Kate Shelley Bridge. He’s also been to Iowa City and Council Bluffs to probe the tale of haunted “black angels” in city graveyards.

He notes there are never predictions of good luck, like you’ll win the lottery, but it’s instead something like you’ll lose your sight or your life. Of all the places he’s visited in Iowa, Lewis says only a few really gave him the heebee-jeebees, including a haunted bridge in rural Webster County, which was supposedly inhabited by a werewolf — though he didn’t actually see the creature.

“Another place that really creeped me out was the Villisca axe murder house in Villisca where eight members of a family and a couple guests were brutally killed with an axe,” Lewis says. “The case was never solved. Now, if you have a macabre sense of adventure, you can spend the night in the house where they were tragically murdered.”

Lewis has a Masters of Science in Applied Psychology and has studied the paranormal for 14 years. His talk is scheduled for tonight at 7 o’clock at the State Historical Building in Des Moines. Learn more about the book at: “unexplainedresearch.com“