You are here: Home / Sports / Iowa moves to 5-2 with record setting win 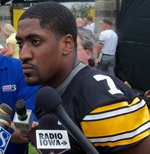 It was a big day for senior receiver Marvin McNutt who had eight catches for 184 yards and three touchdowns his 80-yard touchdown reception late in the first quarter established a new school record for career touchdown grabs.

James Vandenburg was 12 of 16 for 253 yards and four touchdowns and Marcus Coker piled up 139 yards of rushing as the Hawkeyes rolled up 456 yards on offense.

The Hawks will be looking to reclaim Floyd of Rosedale next weekend after losing to the Gophers in last year’s regular season finale. the Gophers are 1-6 on the season after a 41-14 loss to Nebraska.