You are here: Home / Fires/Accidents/Disasters / One third of Iowa counties still under burn ban 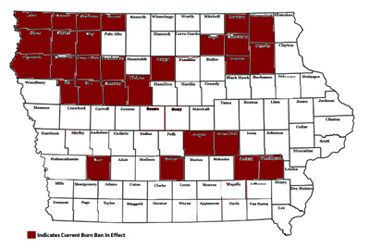 He says strong winds can add to an already dangerous situation.

“(Winds) can spread the fire directly from one field to another or take a burning ember or burning leaves and spread the fire danger that way also,” Humphrey said. There are currently 28 counties under burn bans, primarily in northern Iowa.

Many of the counties have had the bans in place for three weeks due to little or no rain. Humphrey says much of Iowa could use a good soaking.

“A good substantial rain that’s going to wet everything down, you’ll still have some dry vegetation, but at least the wet ground underneath will limit that chance of the fire spreading,” Humphrey said. Officials this month have responded to several fires in farm fields that were sparked by the combination of dry vegetation, overheated machinery and wind.