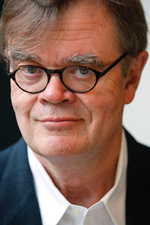 The man behind one of the most famous voices in radio will be central Iowa tonight to do what he does best — gab about what’s on his mind before a live audience.

Garrison Keillor is known to more than four-million listeners a week on N.P.R. as the host of “The Prairie Home Companion” and his famous monologues.

The 69-year-old Keillor is speaking at Drake University in Des Moines, where law professor Neil Hamilton is in charge of the lecture committee. Hamilton says they didn’t ask Keillor to take any particular avenues in his address.

“We have every reason to expect it’ll be a delightful evening,” Hamilton says. “It’ll probably reflect on his career and broadcast and as a writer and his Midwestern sensibilities and sense of humor. I don’t know that he’s one you could necessarily direct if you wanted to.” Keillor, who’s also a best-selling author and Grammy winner, is known for his books and radio monologues about Lake Wobegon, which he claims as his hometown.

Hamilton says the Drake audience may get to hear a few tidbits about the fictional rural Minnesota hamlet. “I would hope there’s a little bit of Lake Wobegon in there,” Hamilton says. “I would imagine some in the crowd would be disappointed if there aren’t.” A Prairie Home Companion first went on the air in 1974 and is now heard on some 600 stations nationwide and around the world on Armed Forces Radio.

Keillor’s talk at Drake’s Knapp Center is free and Hamilton’s expecting a full house. “We can seat around 8,000 and we had a crowd of about that size for Maya Angelou and you never know how large of a crowd to expect and we’re expecting quite a few,” he says. Keillor says he’s retiring from radio in the spring of 2013, but says he will continue to write.

The talk begins at 7 P.M. For more information, visit www.drake.edu/bucksbaum