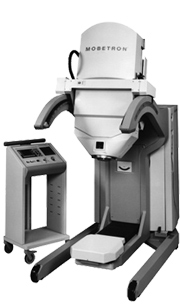 An eastern Iowa hospital will become the first in the state to offer a new type of technology to cancer patients. It’s called intra-operative radiation therapy. Ted Townsend, president and C.E.O. of St. Luke’s Hospital in Cedar Rapids, says the one-point-three-million-dollar machine will be ready for use in a few months.

“We do expect it to be a draw for patients outside the Cedar Rapids area,” Townsend says. He says a similar machine is now in use at a hospital in Sioux Falls, South Dakota, and people are driving five and six hours to take advantage of the technology. He says the familiar machine used in radiation therapy has been miniaturized and is on wheels.

Townsend says, “What this does is allow us to take a piece of equipment that can create radiation into the operating room so patients who are having cancer tumors removed can receive either all or a significant portion of their radiation while they are in the operating room.” He says it offers cancer patients in Iowa a new treatment alternative.

“What this does is make it so that a person who’s having cancer surgery can have the largest does of their radiation right in the operating room,” Townsend says. “It also means it’s incredibly accurate because we put the machine onto the site of the surgery where the tumor is removed, where roughly 90% of the tumors recur in later life.” He says the machine can provide a very concentrated dose of radiation, without exposing healthy organs.

“We can give a week’s worth of external beam radiation in one minute in the operating room,” Townsend says. “We think that’s going to be a significant convenience and a reduction in pain and suffering for patients and we know it’s going to save them significant dollars.”

He says this technique may decrease, and in some cases, eliminate the need for further radiation therapy, significantly improving the patient experience and reducing the cost of care. The equipment is scheduled to be operational in April of 2012.