You are here: Home / News / Zombies are the hot this Halloween 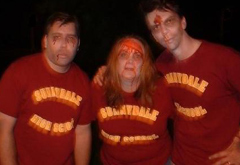 Vampires have finally been staked and they’re no longer the top costume of choice as Iowans shift their Halloween focus to portray another sort of undead spook.

Veronica Dietrick works at The Theatrical Shop in West Des Moines and says this year’s favorite is a familiar fright.

Aside from shambling, brain-eating ghouls, she says friendly children’s storybook characters are also making a comeback this year, from Snow White or Cinderella to Alice in Wonderland.

“A lot of the ladies are interested in that,” Dietrick says. “Pirates are an eternal favorite, a lot of superheroes. We get a lot of people who each person has their own unique idea about what they’d like to be.” She says the store’s also helping people who want to resemble someone who’s famous on TV or on the radio.

Dietrick says, “We’re still getting a lot of people interested in dressing up like the ‘Jersey Shore’ people and pop stars and rock stars, everyone from Justin Beiber to Lady Gaga to Michael Jackson.” There’s also a jump in retro-80s rock stars, she says, as people want to go trick-or-treating or to costume parties as David Coverdale of Whitesnake, or Madonna, Slash from Guns ‘N’ Roses or Cyndi Lauper.