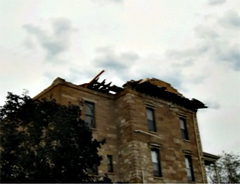 Old Main without its roof following the storm in Vinton.

The Board of Regents gave the Iowa Braille and Sightsaving School in Vinton approval this week to move ahead with repairs on the buildings on campus that were damage by the July windstorm.

Superintendent Patrick Clancy says they have temporary fixes in place, but have to get the process going for a permanent fix. The four-story Old Main building suffered the most severe damage — including the loss of its roof.

He says the pitched roof on the Old Main building and the reconstruction will take some time and they needed approval to get the design work underway. Clancy says the damage to the campus could be anywhere from three to five million dollars. He says the total costs could well be in the $5-million range, as he says cost estimates from the insurance providers have come in, but there is still some work to be done on the estimates.

Clancy says they are insured with a $1-million deductible, and the county was declared a federal disaster area, so they will get some federal money. Clancy says they’ve already exceeded one million dollars in the emergency response and the work to protect the property after the storm. 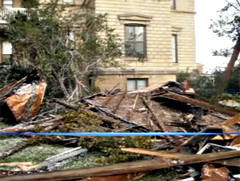 Remains of the roof in front of Old Main at the Sightsaving school.

He says there’s the potential for FEMA to reimburse the state for up to 75% of the costs that are not covered by insurance. Clancy says Old Main is the second oldest state facility, opening in 1852.

He says it is an important part of the historic and current culture of the Vinton community, and important that it be restored.

Photos courtesy of the Board of Regents.