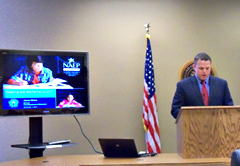 “Iowa’s gaining national attention, not for leading the way, but for demonstrating a consistent pattern of stagnation and mediocrity,” Glass says.

The results from the National Assessment of Educational Progress (NAEP) looked at math and reading for fourth and eighth graders.

Glass says the lack of improvement hits all student groups. Glass says the pattern exists not only among disadvantage and minority students, but also among white students. He says while Iowa has become more diverse, the white students that make up 80-percent of the student population, are also falling short.

Glass says the test results show the need for the state to adopt the reforms introduced by the department and governor. He says that blueprint for education has ideas that can turn things around. “The blueprint is focused on the big drivers in education, that is improving teaching, improving learning and instilling the spirit of innovation,” Glass says. He says the state has to improve the quality of people in schools, radically improving the way kids learn and improving the support system.

You can see all the results at:nces.ed.gov/nationsreportcard.