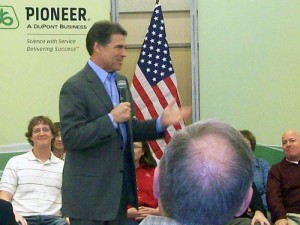 Republican presidential candidate Rick Perry emphasized his roots on a Texas farm late Thursday afternoon as he met with employees of Pioneer Hi-Bred in Johnston. Perry repeatedly used the word “consequential” to describe the company’s potential to provide new breakthroughs in planet genetics.

“That’s really what America should be and historically has been all about, being consequential in the world,” Perry said. “…All too often people think about agriculture and sometimes they miss the importance of what we do — and I say we because I still have those roots that run deep in that little place in Paint Creek,Texas.”

Perry grew up on a cotton farm. He served as State Ag Commissioner in Texas before being elected as that state’s governor. One of the Pioneer employees asked Perry to define what separates him from the other Republican candidates, and Perry touted his 10-plus years as governor.

“It’s running a really bit entity…being the CEO of the 13th largest economy in the world,” Perry said.”…The vast majority of the people in this country are looking for someone who has the experience and who has the philosophical understanding that the most powerful thing that happens in America…is that America again becomes a strong economic power.” 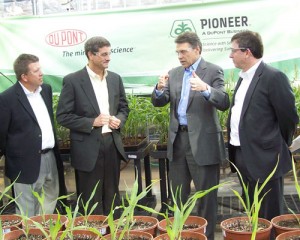 Perry toured Pioneer’s research facilities and chatted with executives, then met for a little more than an hour with Pioneer employees before closing with his new campaign mantra:

“Let me leave you with this last question: are you better off today than you were $4 trillion ago?” Perry asked.

AUDIO of Perry’s appearance at Pioneer.

Perry did not take questions from the reporters at the event. However, during an interview on CNN Thursday, Perry said his campaign had did not leak allegations that rival Herman Cain had been accused of sexual harassment while Cain was head of the National Restaurant Association.

Cain and some of his top aides had accused a man linked to Perry’s campaign as being the source for the original Politico story and demanded an apology. Perry told CNN his campaign “knew nothing” about the allegations and he would fire anyone involved in releasing such “heinous” allegations against a competitor.

Cain’s campaign sent an email to supporters today, appealing for contributions to a newly-created “Iowa Fund”.  The following was underscored and attributed to Cain himself: “It’s getting ugly out there. But I am not deterred.”