You are here: Home / News / Romney promises to be deficit slayer (audio) 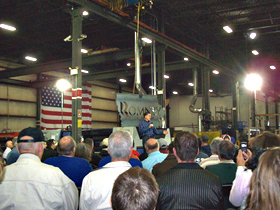 Mitt romney speaks at an event in Dubuque.

Republican presidential candidate Mitt Romney promises to cut half a trillion dollars in federal spending within four years by “killing programs” that are unnecessary and reducing the federal government workforce by 10 percent.

“I believe that one of the reasons we’ve had such a hard time getting our economy going again is because of the huge deficits that are being racked up by this president and by politicians in Washington. I will slay the deficit beast,” Romney said early this afternoon in Dubuque.

“It’s killing jobs.It’s shadowing our future and it’s keep our kids from having the bright prospects that they deserve.”

Romney said there is a “desperate need” to balance the federal budget.

“Now for me, this is not an impossible dream,” Romney said. “It’s something I’ve seen happen in other settings.”

Romney touted his experience as a business executive as well as the four years he spent as chief executive of the state of Massachusetts. Romney proposed linking federal government workers’ pay to private sector wages and he’d accomplish the 10 percent reduction in the federal workforce through attrition — by not filling vacancies. The 2012 election is a year from now and, during his speech in Dubuque, Romney suggested what he terms the “Obama Great Recession” will continue for another four years if President Obama wins reelection.

“Now the alternative, of course, is that you turn on your TV about a year from now and instead of seeing the Obama camp celebrating you’ll see something on the TV that says, ‘Mitt is it,’ and I’ll have won,” Romney said, to applause and cheers. “Now that’s a scenario I’m looking forward to because I want to go to work to make America, once again, the most attractive place in the world, the most prosperous place in the world for middle income Americans.”

Romney spoke for about 17 minutes before chatting and posing for pictures with people in the crowd.  Romney is due to speak in Davenport late this afternoon.