You are here: Home / News / Some Backbone State Park cabins may be demolished 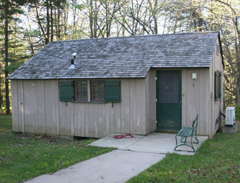 The cabins at Backbone State Park in northeast Iowa’s Delaware County are in need of expensive repairs or they could be demolished.

Kevin Szcodronski is chief of the State Parks Bureau for the Iowa Department of Natural Resources. He’s formed a task force to study the issue and he wants input from those who’ve recently stayed in the cabins.

“They’re pretty popular and were rented out pretty much all of this summer even in their state of disrepair,” Szcodronski said. “That’s why we’re reaching out to the people of Iowa and people who’ve actually stayed in them to ask what do we do with these historical features?”

Backbone became Iowa’s first state park in 1920 and Szcodronski says it remains one of the busiest parks in Iowa. The cabins, built by the Civilian Conservation Corps in the 1930s and 40s, are listed on the National Register of Historic Places. Szcodronski says that distinction makes this a difficult decision.

“We’ll only tear them down and replace them with something completely different if there’s just absolutely no other option or public safety becomes such a concern that we have to do something like that,” Szcodronski said. It’s possible work on the cabins could begin next spring.

“We hope to have a decision by at least December or January which route we’re going to go – renovate or replace,” Szcodronski said. He estimates restoration costs at $75,000 per cabin, while replacement would be around $125,000 per cabin.

Anyone wishing to comment on the cabins may do so by emailing northeast Iowa Parks Supervisor John Maehl: [email protected]