You are here: Home / News / Ancient Egypt the focus of next Science Center exhibit 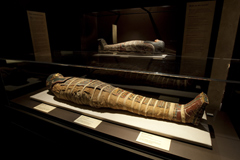 The new exhibit at the Science Center of Iowa will focus on ancient Egypt.

A new exhibit under construction at the Science Center of Iowa will resemble a pair of ancient Egyptian tombs when it’s complete.

Richardson says, “There’ll be hands-on components and a bunch of artifacts, including a real human mummy and a few animal mummies, also information on the current science used by archaeologists in Egypt.”

A few highlights include forensic facial reconstructions and a life-size prototype of a mummy in a stage of “unwrapping.” She says visitors may think they’ve been transported across time and continents.

“It’ll be a journey through Egypt,” Richardson says. “You start out in what is a modern-day Egyptian scene and then you enter into the artifact room. There are a couple of tomb structures you’ll go through. There’s one that has heiroglyphics and art and the second tomb area is where the mummy is housed.”

Through those authentic artifacts, high-tech science and hands-on discovery, she says visitors will be able to unearth the mysteries of Egypt, its culture and its people. “There’s an interactive display that shows how the sands move around the different pyramids and structures and can bury history,” Richardson says. “There’s an exhibit where you can actually pull on blocks of stone and see how heavy they were and imagine constructing the pyramids.”

The exhibit opens November 25th. The previous exhibit, “Body Worlds Vital,” drew more than 80,000 visitors from 28 states during its six-month run, making it the most successful ticketed exhibition in the history of the Science Center of Iowa.

Learn more about the new exhibit at: www.sciowa.org/lostegypt