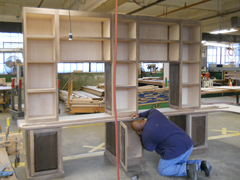 Iowa prison inmates have built a custom made business center for a facility in Iowa City that houses families of kids who are facing extended stays at the University of Iowa Children’s Hospital.

“They approved the design and we built this really spectacular piece,” Clark said. “They’re really looking forward to it because it will give families there a nice area where they can go and surf the Internet, talk on Skype or do whatever else they need to do on computers.”

The business center furniture, which is being donated to the Ronald McDonald House, is being installed today.

Clark says around 45 inmates work in the Iowa Prison Industries program at the Fort Madison State Penitentiary, where the furniture was designed and crafted.

“I would say about 20 guys worked on it…lots of hands were on this project,” Clark said. Iowa Prison Industries (IPI) employs more than 700 inmates at eight state institutions. IPI does not receive state funding, but returned just over $1 million to Iowa’s General Fund in fiscal year 2011.